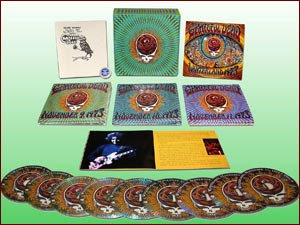 About a year ago, Winterland 1973 was made available for purchase on dead.net, but then, just as suddenly as it appeared, it was removed. Credit card charges were refunded and the buzz on the Internet was fierce. It was perplexing as the flow of new product had slowed to a standstill since the controversial “merger” with Rhino in 2006 and loyal fans were hungry for something – anything - to be released. And Winterland 1973 was something for which even the most cynical Deadhead might shell out the big bucks. So, when it was pulled from the website and labeled a “hoax”, some folks were mighty annoyed – including me. What were they up to? Gauging audience response after the surprise sell-out of the limited edition Fillmore West 1969 box set? Possibly.

Now, a year later, Winterland 1973 is actually here; and it is a truly magnificent thing. This nine-CD box set is so lovingly well-done, I can easily forgive them their previous bait & switch routine. After all, 1973 is widely considered to be one of – if not the – peak of the Grateful Dead’s career (and who am I to argue?) and these shows in particular are especially prized, considered by many to be the best Dead shows EVAH. Maybe so.

The passing of Pigpen (who was, from the start, if not the leader, then the soul of the band) barely slowed the band’s momentum that had been building since the Fall of 1971 with the introduction of Keith Godchaux on piano (and, for better or worse, his wife Donna Jean on vocals). New songs like “Eyes of the World” and Weir’s “Weather Report Suite” were taking the music in overtly jazzy, harmonically complex directions while primal, modal standards like “Playing in the Band”, “Dark Star” and “The Other One” were evolving into symphonic-length tours de force of collective improvisation and brain-melting psychedelia.

Indeed, Winterland 1973 presents an exquisite three-night run on the Dead’s home turf in San Francisco and, yes, it really is about as consistently good – no, downright mindblowing – a run of shows as they ever played. Anyone with even a passing familiarity with the Grateful Dead knows that consistency was never their forte. One had to take the good with the bad on any given night, and it was the moments of magic (and the promise of more) that kept the Deadheads coming back night after night. Here, the band sounds supremely confident from the get-go: relaxed, unfussy, yet highly polished – heck, even the cornball “El Paso” is performed with subtlety and finesse. Extraordinarily tight when they need to be, yet willing and able to “take it out” at any moment - this is the Grateful Dead at their most expansive, dynamic, and synergistic. Phil Lesh once characterized the Grateful Dead as “electric chamber music” and these three concerts surely epitomize this ideal.

Despite the somewhat constricted repertoire of the time, each concert has its own particular flavor with 11/9 easing into things with a focus on songs rather than big blow-out jams, while 11/10 features the brilliantly executed palindrome of “Playing in the Band>Uncle John’s Band>Morning Dew>Uncle John’s Band>Playing in the Band.” Of course, 11/11 is already widely circulated amongst tape traders and is considered one of the all-time-great shows with its incredible “Dark Star>Eyes of the World>China Doll” sequence deep in the second set. It doesn’t get much better than this, folks – even with the unfortunate reel-flip during “Eyes.”

Recorded on the fly by roadie Bill “Kidd” Candelario using a splitter and a ¼” Nagra reel-to-reel, the sound quality is stunningly good, given the circumstances. The mastering process utilizes a remarkable new software program called Clarity, developed by Plangent Processes in Nantucket, Massachusetts. The program identifies and corrects timing errors as with the inevitable (and sometimes disastrous) wow-and-flutter problems that occur with analog tape, thereby restoring the music’s proper timing and pitch. Compared to the version of 11/9/73 that previously circulated amongst Deadheads, the Clarity process is truly miraculous.

The three shows, each in a deluxe gatefold sleeve, are housed in a psychedelic “cigar” box along with a replica 1960s-era “Good Old Grateful Dead” button and a facsimile of a “Deadheads Newsletter” circa. 1973. When you open all the gatefold sleeves, you can assemble a large version of the very trippy “eye-ball” cover image. Nice. Oh, and this time, the “bonus disc” really does feel like a bonus, consisting of most of the second set from Cincinnati, OH 12/4/73, including an outrageous, teeth-grindingly intense space jam. While I wouldn’t recommend this to the merely curious, if you’re a hardcore fan, then Winterland 1973 is well worth the $100.00 asking price. Folks from all over the world descended upon the tiny Belcourt Theatre for the first King Crimson concerts since 2004, a “warm-up” for the upcoming 40th Anniversary Tour. As we made our way into the tiny theatre and noticed the two enormous drum sets that dominated the stage, Liz remarked, “It’s going to be loud, isn’t it!” Yep. We were in for a pummeling.

The performance itself was exciting, but also predictably rusty, with several near-trainwrecks preventing the music from ever truly taking flight. Nevertheless, there were moments of hair-raising intensity, terrifying displays of raw power, and glimpses of sublime beauty. Highlights for me included newcomer Gavin Harrison’s jaw-droppingly complex drum fills on “Indiscipline”, an achingly tender version of “One Time”, and Tony Levin’s relentless groove on “Sleepless.”

As for the Venal Leader himself, Robert Fripp, he has taken to hiding behind a large stack of equipment, rendering himself virtually invisible to the audience. From our vantage point, we were able to watch his fretting hand if he was playing down by the nut and, occasionally, we could see the top of his head as he made adjustments to his gear or a foot pressing a pedal. He further made a point of exiting the stage from behind a scrim and refusing to come out from behind his rack for a bow with the rest of the band at the conclusion of the performance. Now, Mr. Fripp’s aversion to photography is well known and if these kinds of defensive maneuvers allow him enough peace of mind to continue performing, then so be it; after all, we’re there to listen more than to see (although seeing is nice, too). But this behavior makes even Miles Davis’s notoriously hostile stage persona seem downright gregarious and it’s difficult not to read it as utter contempt for the audience. And yet, a recent diary entry indicates that, despite all appearances, Mr. Fripp doesn’t take himself too seriously.

In any event, the tactics seemed to work: I saw no photography, audio/video recording, or cell phone abuse and that alone was welcome indeed. In fact, the audience was rapturous and the rest of the musicians seemed to be having a pretty good time. So, whatever. I was grateful to be there and Fripp’s guitar playing was typically brilliant, combining raging shards of metallic bombast with delicately intricate flatpicking and otherworldly high-tech textures, sometimes all within the same song. Too bad we couldn’t see him.

I’ll be curious to see if the setlist varies at all over the course of the tour. I suspect the band will work out the kinks and the larger venues should allow the full power and fury of this version of the band to fully blossom. Happy 40th Birthday KC!