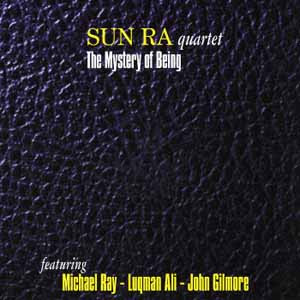 Sun Ra Quartet: The Mystery of Being (Horo/Klimt 3LP)

There have been several dodgy, grey-market reissues of the Horo records over the years and the latest is a vinyl-only box set, The Mystery of Being, released back in 2011 on the tiny French label, Klimt, which crams the two January 1978 double albums onto three LPs. Sound quality is actually pretty good – certainly better than my crackly needledrops—but at the same time, I suspect these are taken from vinyl sources and then (aggressively) de-noised. Moreover, the sides are excessively long, resulting in diminished dynamic range and susceptibility to noise. Sadly, one side of my copy has a nasty pressing flaw, which causes the stylus to skip—and they are now out-of-print, so it is not so easily replaceable. Bummer.

Although there are neither mastering credits nor any liner notes whatsoever, this set purports to present the music in chronological order, providing recording dates on the labels. According to them, the sessions occurred as follows:

Side One: January 2: My Favorite Things, Moon People, Rome at Twilight, When There is No Sun
Side Two: January 7: Sun Steps, Exactly Like You, Friend and Friendship
Side Three: January 8: The Horo, Sun Sky and Wind
Side Four: January 13: Springtime and Summer Idyll, Constellation
Sides Five and Six: January 2, 7, 8, 13: One Day in Rome, Bridge to the Ninth Dimension, Along the Tiber, Rebellion, The Mystery of Being

That makes some sort of sense until you get to the last disc, which could have been recorded on any one of those dates. Huh? This is less than helpful and just another indication of this set’s dubious provenance. I would guess that basic tracks for New Steps were recorded on January 2, with overdubbing taking place on January 7. Similarly, basic tracks for Other Voices, Other Blues likely took place on January 8, with overdubbing happening on January 13. That’s just a guess, but that would mirror the usual progression in a multi-track environment. Then again, such was a highly unusual practice for Sonny, so who knows how it went down? As with so much in the Sun Ra discography, not much can be known with certainty except that the music is fantastic.

I cannot whole-heartedly recommend The Mystery of Being, although if you can find one for a decent price, it might be worth it. Otherwise, I’d recommend ponying up for the rare originals. Me? I’m still waiting for a proper reissue of these classic Sun Ra albums. May I live so long...!
Posted by Rodger Coleman at 6:02 PM No comments:

Too many records, not enough time.

Need another one? I got one for ya: 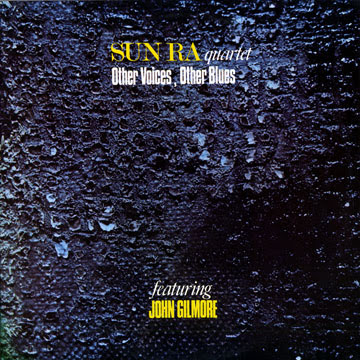 The second Horo studio recording, Other Voices, Other Blues, was recorded at Horo Voice Studio in Rome, Italy on January 8 and 13, 1978 and released later in the year as a two-LP set, Horo HDP 23-24 (Campbell & Trent p.246). As with the other Horo titles, Unity and New Steps, distribution was poor (especially stateside) and has never been officially reissued, making it one of the rarer albums in the already obscure Sun Ra discography. What a crime! While all of the Horos are fascinating records, Other Voices, Other Blues is by far my favorite of the two Italian studio sessions.

Unlike New Steps, there are overdubs on every single track (an unusual practice for Ra, even into the '80s and '90s), with Sonny adding synthesized bass lines (or other stuff) while John Gilmore, Michael Ray and Luqman Ali contribute additional percussion to the mix of keyboards, saxophone, trumpet and drums. This greatly thickens the sound of the quartet and lends a consistently funky and experimental flavor to the album. It’s easy to picture the four men crowded into the tiny studio, earphones on their heads, gleefully constructing these oddly captivating tracks. Any tentativeness heard on New Steps is gone on this second day in the studio—they are going for it! Gilmore is again the star of the show, delivering an endless stream of gloriously inventive solos, while Ray more than holds his own amidst Sun Ra’s burbling, wheezing keyboards and rollicking acoustic piano, only occasionally resorting to his patented (and often annoying) echo-echo trick. In fact, it appears that the young upstart may have gotten under Gilmore’s skin, inspiring some of his most fiery and intensely brilliant playing on record.

Yet, despite all these aural pleasures, there is something slightly dissatisfying for me about these quartet sessions. It’s not just the absence of bass since Ra is adequately providing the bottom end on synthesizer (at least most of the time), so I can only point the finger at the laconic—if not downright sleepy—drumming of Luqman Ali. To be fair, his subtle, sensitive touch contributes to the relaxed, dreamy quality of the albums. But I find myself wanting more from him on the longer, weirder tracks like “Bridge to the 9th Dimension” or “Constellation,” where his boom-chick rhythms remain stubbornly earthbound, only taking off with the addition of Gilmore’s overdubbed drums and percussion. I realize that it is totally unreasonable to expect Ronnie Boykins and Clifford Jarvis to be in the rhythm section, but I can’t help but imagine what that might have sounded like.

Nevertheless, there is an undeniably magical quality to the Horos—and especially Other Voices, Other Blues—which makes them uniquely special, with a loose, exploratory feel reminiscent of the classic Choreographer’s Workshop recordings. Beyond Gilmore’s phenomenal soloing and the ear-tickling studio wizardry, it is Sun Ra’s uncanny ability to transform the cheesiest, most primitive electronic keyboards (and beat-up pianos) into powerfully expressive instruments that is most impressive here. Turning these humble tools into a virtual orchestra of tones, timbres and effects, Ra demonstrates his mastery of electronic (and electrified) music while his compositions—mostly thrown together in the studio—show his effectiveness as an arranger and bandleader, with the simple but flexible heads allowing the small ensemble to wander far and wide. Curiously, Ra did not bother to provide proper titles to these new works, leaving them to Horo to invent. “Springtime and Summer Idyll,” “One Day in Rome” and “Along the Tiber” (and New Steps titles like “Friend and Friendship”) are probably not what Sonny had in mind and are embarrassingly incongruous to the music. However, I suspect he signed away his publishing in order to make these records, so he didn’t (or couldn’t) care what they were called. Whatever, these are inimitably Sun Ra compositions, however slight they may appear on the surface.

Quibbles aside, the Horo quartet records are an essential piece of the Sun Ra puzzle, with Other Voices, Other Blues being a near-masterwork. And Sonny was clearly inspired by this ad hoc, small group setting: he booked at least two concerts for the band while they were in Italy, which were recorded for release on his own Saturn label. We’ll take a listen to those in coming weeks on Sun Ra Sunday.
Posted by Rodger Coleman at 7:07 PM No comments:

I had the great good fortune to see my good friend and musical collaborator, Sam Byrd, the other night, during one of his spur-of-the-moment visits to Nashville. Sadly, we did not play any music (my home studio is a disaster area at the moment) but we got to hang out, drink beers and listen to records, one of our favorite activities. It’s always a pleasure to see Sam, even if only for a little while. We’re hoping to book some time in a real recording studio when he comes back to town over the Christmas holidays, just to see what would happen in that environment. I’ll keep you posted on these developments as they progress.

The first round of eBay auctions went reasonably well, with all twelve records selling for what I would consider a fair price. Some sold for less than I think they’re worth; others sold for a little more than I expected. So, even after fees, I’m pretty happy with the results. Nevertheless, I’m not sure it is really worth all the work that went into photographing the albums, creating the listings and shipping them out. While I made several more dollars than I would have trading them at Grimey’s, my time is worth something as well. Even so, I do enjoy playing with the camera—and I have a lot of records I’d like to get rid of—so I might set up another round next week. We’ll see…

I’m pleased to see that my CD with Sam, Indeterminate (Improvisations for Piano and Drums), has been getting some airplay on independent and college radio stations. One DJ, Ann Porotti at WTJU-FM in Charlottesville, Virginia has provided a review:

“Hard to warm to”—I love it! That’s right up there with an infamous review of my old band, UYA, which described the music as “nerve-wracking crap” (thank you, Sam, for reminding me of that infamous quip). Well, at least she listened and played a track on the radio. We can’t ask for anything more than that.

You can hear it for yourself by clicking below: