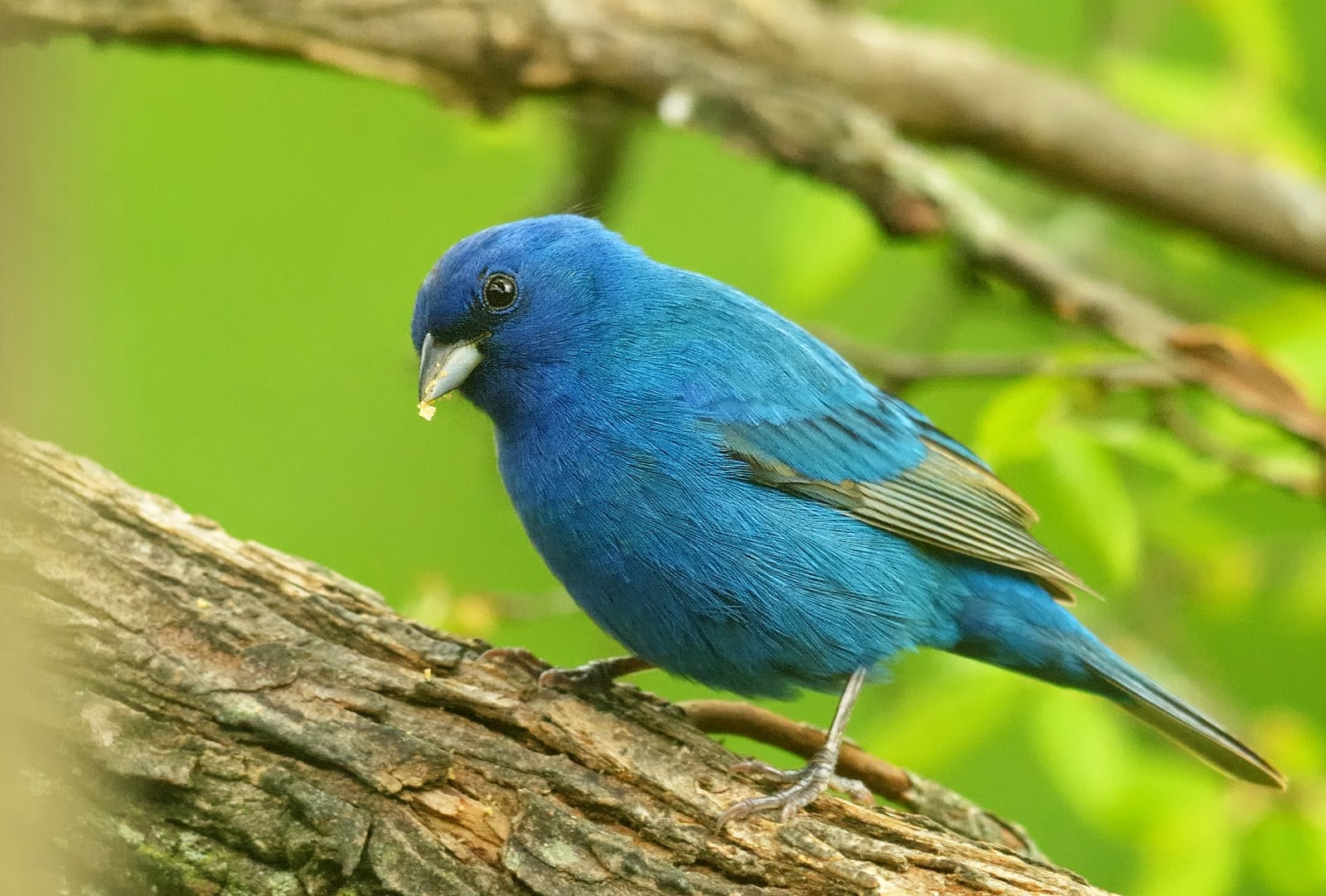 This is the time of year when some unusual birds will make an appearance at the feeders, including my personal favorite, the Indigo bunting. Actually quite common in the eastern portion of the U.S., they can be hard to spot, since only the males are blue--and only in the spring and summer. This sweet little bird will hang around the feeders for a few days before disappearing back into the woods, so I grabbed the camera and snapped a few shots while I could. What amazing creature--such superfluous beauty! I do love this time of year.

As you know, Saturday the 18th was Record Store Day 2015. Every year, I feign disinterest but always get swept up in the (admittedly manufactured) excitement as the event draws near. But these days, I do it at my own pace. Grimey's is just too much of a crazy scene on the day of (but usually has plenty of stuff leftover the next afternoon) so I celebrated at a couple of other places. You can probably spot all the exclusive releases in my playlist but for more excruciating detail, check out my rambling show-and-tell video over on YouTube. I hope all your Record Store Day dreams came true!
Posted by Rodger Coleman at 10:19 AM 1 comment: 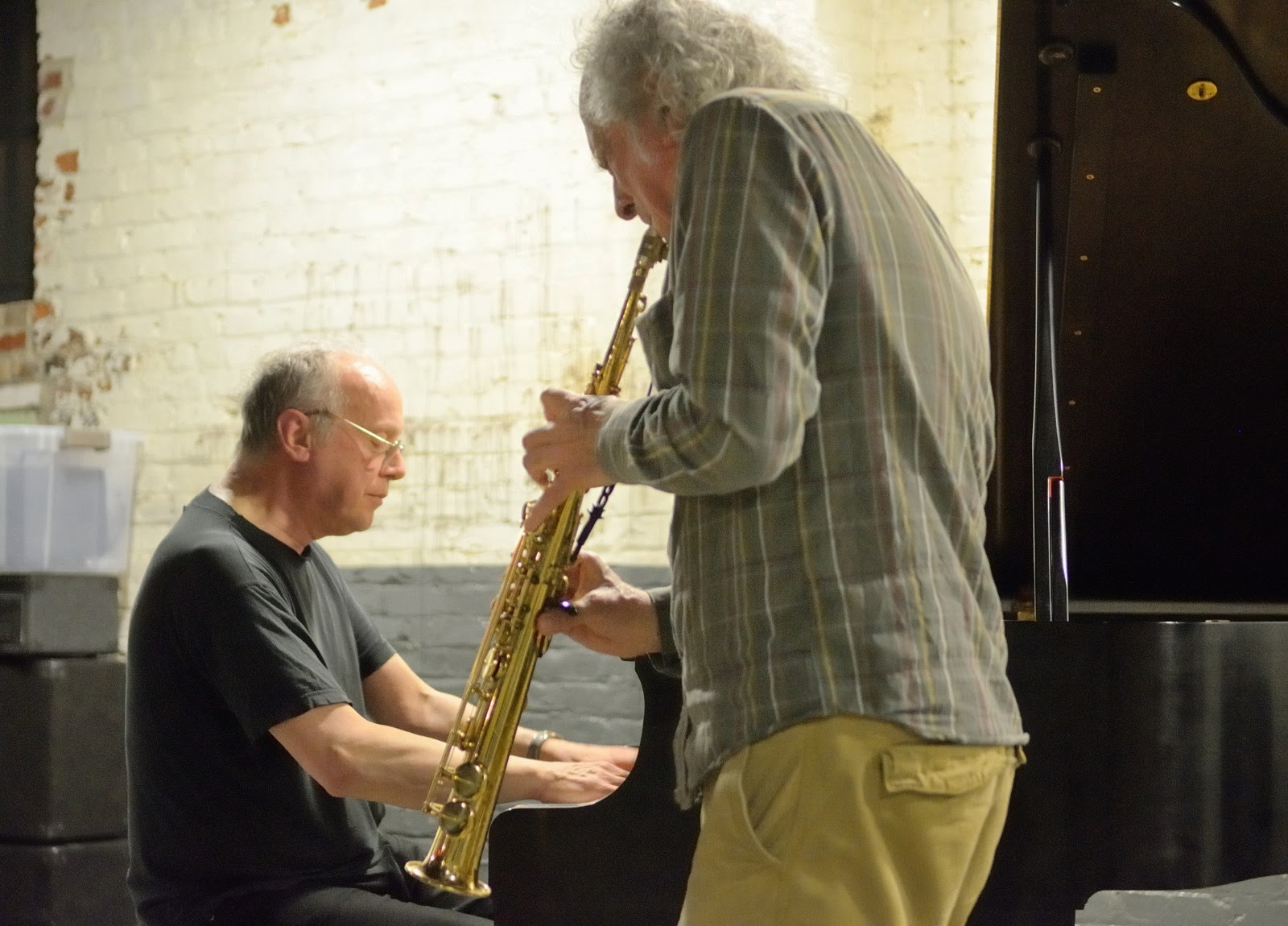 Following up on my last post, after Susan Alcorn’s sublime solo set, the legendary saxophone/piano duo of Trevor Watts and Veyran Weston took the stage. Mr. Watts is, of course, a seminal figure in the British jazz and free improvisation scene, being a founding member of The Spontaneous Music Ensemble and the London Jazz Composers’ Orchestra in the 1960s and ‘70s. His association with Veyran Weston dates back to the 1980s and the formation of the Moiré Music ensemble and they released their first duo recording, 6 Dialogues, on Emanem in 2002. Since then, the pair has toured the world, concertizing and giving workshops. I regretted missing their last visit to Nashville a couple years ago, so was extremely grateful for another opportunity to see these amazing musicians in action.

They played three freely improvised pieces over the course of an hour—which seemed to fly by in an instant—with Watts concentrating on his signature, spiraling soprano saxophone and occasionally moving to the more throaty tenor. Meanwhile, Weston’s piano provided an insistent and wildly inventive accompaniment, abounding with driving rhythms, multi-voiced counterpoint and subtly shifting harmonies. While the sheer virtuosity on display was truly mind-blowing, what really impressed me was how deeply connected they were at every moment. These are two people who have been playing music together for many years and have, over that time, developed a highly evolved, very personal vocabulary. If, as Susan Alcorn suggests, “music exists in the mind,” then what we witnessed last Saturday was the kind of “mind meld” possible in free improvisation. What we heard in our heads was transcendent music.

The Emma Bistro is a fantastic venue for this kind of music: spacious and inviting with a warm, slightly reverberant acoustic and extra-comfy, oversized sofas and chairs. Kudos to Chris Davis, Brady Sharp, and FMRL Arts for putting on such an amazing event! Thanks also to Kevin Reilly at Relative Pitch Records for putting me in touch with Susan Alcorn. What a great evening it was!
Posted by Rodger Coleman at 3:43 PM 1 comment: 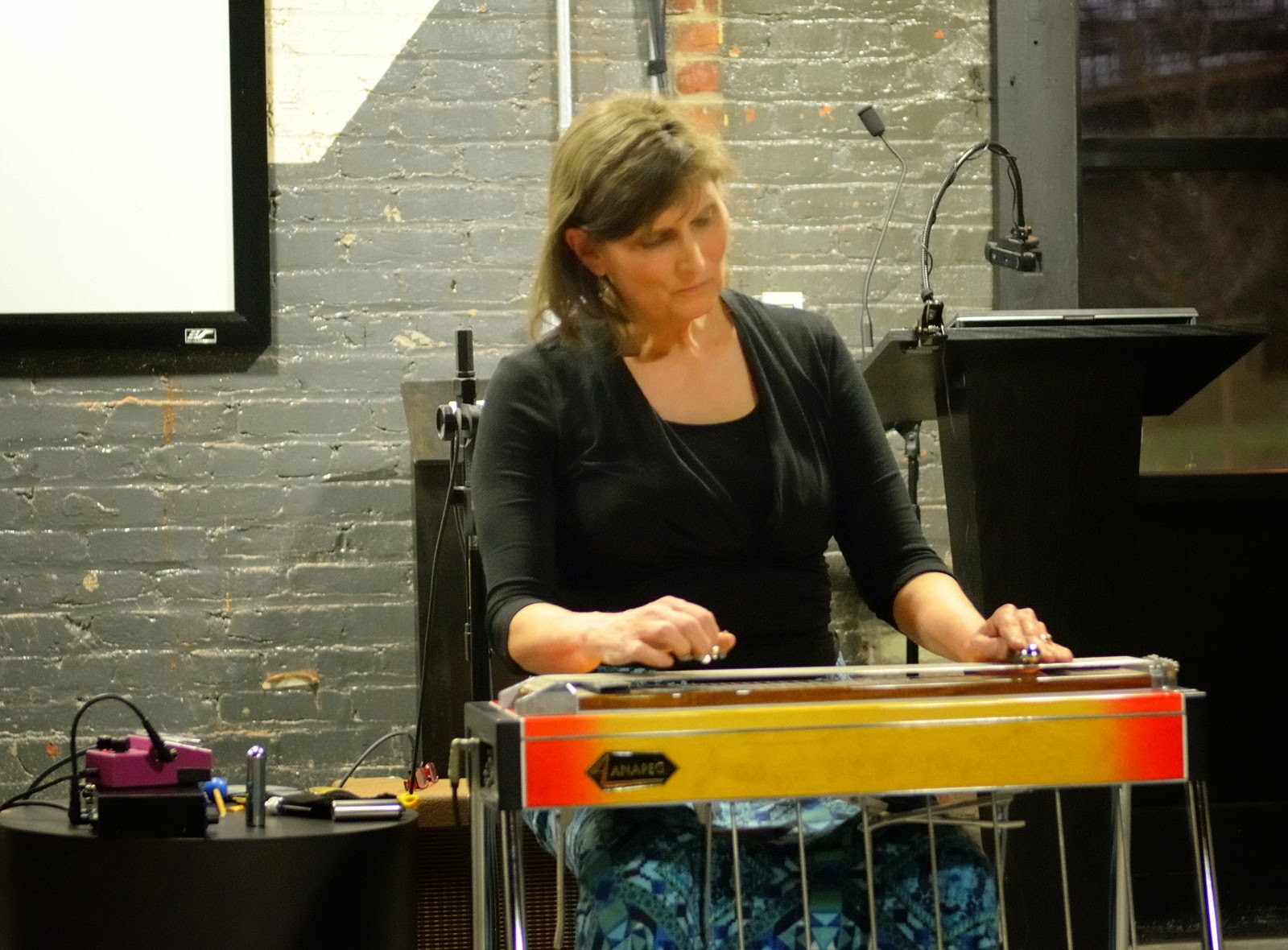 I was listening to NPR in the car recently and I heard composer Philip Glass say something that really got me thinking. He described being asked by a student, “What is music?”  And he replied (without having really thought about it before), “Music is place, a place where musicians go.” This reminded me of my time playing in a band and we would often talk about “going to that other, better place” when the music was really cooking. When it felt like we were communicating telepathically, at the speed of sound, we were seemingly living and breathing in another world, one of freedom and inerrant harmony—but only as long as the music lasted. As soon as the last vibration dissipated, we were back on earth and all its intractable difficulties.

What about the listener, though? The non-musician? Is this place called music accessible to them? Glass’s formulation seems to exclude the audience: the musician goes to this special place and the listener hears the result.  As a musician myself, I can attest that playing music is a very different experience than listening to it. Moreover, it is impossible for me to hear music as a non-musician does because I am constantly analyzing how it’s made—I can’t avoid it. For better or worse, I cannot un-know what I know. You know what I mean?  So, then what does a non-musician hear when listening to music? I have no idea.

I was reminded of this when I read an interview with pedal steel guitarist Susan Alcorn where she said, “I think that music exists solely in the mind. We take the sounds around us, musical and otherwise, and we as listeners create the structure that allows us to experience this in a meaningful way as ‘music.’” In this definition, Alcorn privileges the audience over the musician: “When I am performing, it is the audience, the listener, which is taking the bits and pieces of what I put out and making it into something that hopefully has a personal meaning for them.” Glass is correct to say that music is a “place”—but we all go there in our minds, musicians and listeners together.

To be sure, everyone was transported to that other better world during Alcorn’s solo set at The Emma Bistro last Saturday evening. She coaxed outrageous sounds from the instrument: her left knee moving levers, both feet pressing the several pedals (including the ever-crucial volume pedal, which she played barefoot), while picks and slides glided over the multiple strings. It was incredible to watch—but also deeply moving. Like many other audience members, I could only close my eyes and revel in the beautiful music. Her set opened with the meditative “Heart Sutra” followed by “And I Await The Resurrection of the Pedal Steel Guitar”, a tour de force of extended techniques inspired by hearing Olivier Messiaen’s “Et Exspecto Resurrectionem Mortuorum” on the radio on the way to a country/western gig. Touching stories of a trip to Argentina and the death of her father prompted gorgeous interpretations of Astor Piazzolla’s “Adiós Nonino” and “Invierno Porteño”, both of which later found their way onto Soledad, her latest CD on Relative Pitch Records. Closing with “The Healer” (an original composition dedicated to her acupuncturist), Alcorn playfully quoted Curtis Mayfield’s gospel-soul classic, “People Get Ready,” which drew knowing smiles from the audience. As the last sighing note decayed into silence, it seemed we could perhaps stay in that other, better world forever.

Afterwards, I asked her about music being a place—one that, as she put it, exists only the mind. “Of course, I cannot know what is going on your brain,” she said. “But John Cage showed that we can choose to hear any sound as a piece of music—or not.” Then she added, “Playing Piazzolla’s music is like being in his mind, though. I feel his emotions—they are not my emotions.” Regarding her years playing country music, she revealed her frustration: “Some people thought I was out to destroy the instrument—I got death threats.” Although she bravely went her own way into the realm of free improvisation, she retains an enormous affection for the music. “Doing anything well is difficult and sometimes the simple things are the most difficult to do really well.” She added, “Country music is like haiku. Add a syllable and it’s no longer haiku. It may be good and interesting, but it’s not haiku.” As we heard on Saturday at The Emma Bistro, Susan Alcorn is a musical poet and a true original.
Posted by Rodger Coleman at 4:48 PM No comments: 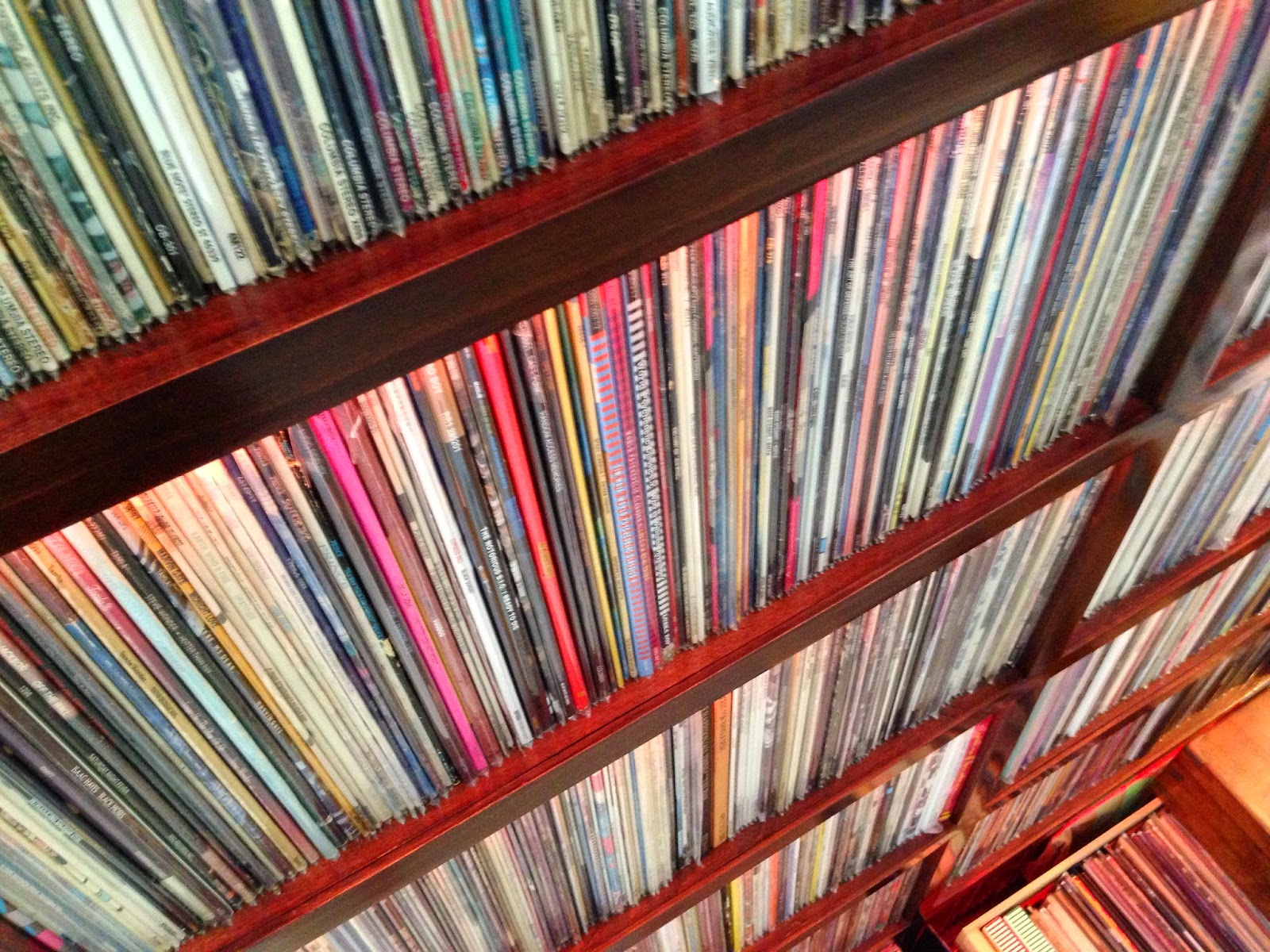 I'm still getting my thoughts together regarding Saturday night -- it was amazing! I'll be uploading a separate post later this week so please stay tuned.
Posted by Rodger Coleman at 10:40 AM 2 comments: