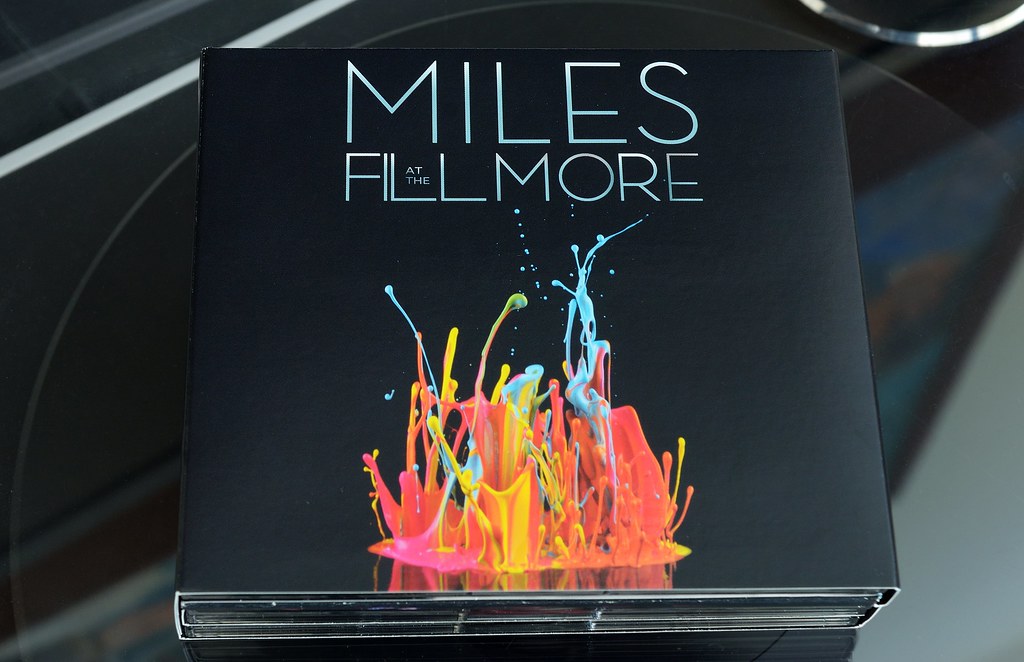 I can’t let this week go by without mentioning the new release in the Miles Davis Bootleg Series, which came out on Tuesday. Recorded over four consecutive nights in June 1970 at the Fillmore East in New York City, this third volume in the series finally presents, remixed and uncut, the music that was brutally edited by Teo Macero to create the Miles At Fillmore double-LP set which was released in December 1970. To be fair to Teo, it was Miles’s idea, wanting each side of the album to represent a single night of the run. With his sets lasting almost an hour, this was a Herculean task and Teo undoubtedly did the best he could in the limited amount of time available. But despite the high quality of the music, At Fillmore has always been one of my least favorite Miles Davis albums, with its jarring discontinuities and truncated jams incessantly interrupting the improvisational flow. Now, at last, we can hear what really went down at the Fillmore on those four nights.

As with the rapidly evolving studio material during this period, Miles’s live band was constantly in flux, a fact that has become increasingly clear with archival releases like this one. A previous appearance at the Fillmore East in March 1970 featured saxophonist Wayne Shorter, along with Chick Corea on electric piano, Dave Holland on acoustic and electric bass, Jack DeJohnette on drums and Airto Moreia on percussion and can be heard on the 2001 Columbia/Legacy release, Live At The Fillmore East (March 7, 1970): It’s About That Time. The landmark Bitches Brew album was released in April and the band now included Steve Grossman, replacing Shorter on saxophone, with Holland playing electric bass exclusively. The April 10 performance was recorded by Columbia at the Fillmore West in San Francisco and released in Japan as Black Beauty in 1973 but did not see a domestic release until the 1997 CD (degraded soundboard recordings from April 11 have been included on The Bootleg Series Vol.3). By the time of this June 1970 Fillmore East run, Miles had added Keith Jarrett on electric organ, thickening the texture and ratcheting up the volume and intensity level. Gary Bartz replaced Grossman in August, appearing at the Isle of Wight Festival on the 29th (which can be found on the 2011 Bitches Brew Live CD). Then, Holland would leave the band in October, to be replaced by the teenaged Michael Henderson, who brought a dark, hypnotic funk groove to the music (see The Cellar Door Sessions box set from 2005, recorded December 16-19, 1970 in Washington D.C.).

As one of the only documents of this short-lived version of the working band, the restoration of these tapes is of monumental historical importance. There was a reason Miles wanted to try to squeeze these four nights onto the two discs allotted him by the label: his band was on fire! The quality of the recordings is also superb—much better than the March 7 debacle. The heavily edited LP contains some hot music, for sure, but to be able to hear these complete sets uninterrupted is extraordinary. Accusations that Miles Davis was somehow selling out playing electric music for rock kids at the Fillmore needs only to listen with an open mind. This is intensely challenging, at times downright harrowing music. It is also joyous, playful and always intensely musical. It is all these things. It is Miles Davis music. If you’re reading, you already know. What more is there to say except what a treat it is to hear Jarrett and Corea with Dave Holland on bass?

Unlike previous volumes of the Bootleg Series, which were derived from crude radio and TV broadcasts, all of the June 1970 material was professionally recorded by Columbia to eight-track tape and newly mixed for this release. Accordingly, the sound quality is excellent, enhanced by superlative mastering by Mark Wilder. Rumor has it that Music On Vinyl will be putting this out on LP—but I don’t really see the point. With the set lists running 45-to-over-50 minutes without a break, this music was made for CD (or, even better, SACD or Blu-Ray—but, hey, we can’t have everything). I love vinyl but I have my limits! This volume of The Bootleg Series is perfect in just about every way and essential listening for every fan of Miles Davis’s electric period.
Posted by Rodger Coleman at 1:00 PM 3 comments:

I love music.
Posted by Rodger Coleman at 6:41 PM 2 comments:

So I'm sitting on the front porch this morning having a cup of coffee and I sleepily observe this car smash into a hapless grey squirrel, the impact registering with an awful, explosive “pop.” Jolted awake, I watch as the car continues on its way while the squirrel spasms and leaps—alarmingly, uncontrollably—down the road, leaving a trail of pinkish blood in its wake. I’m thinking, “Wow. What a terrible way to start the day.”

As I witness this horrible tableau unfold, a woman drives by from the opposite direction, stops her car, gets out and, grabbing the squirrel by its still twitching tail, throws it into our yard. "Thanks a lot," I thought to myself. But then I thought how strange it was for her to have done such a thing. I hope she went straight home and washed her hands—and her steering wheel.

I knew it wouldn't be long until the buzzards showed up, so I went inside and grabbed my Nikon, with my longest telephoto lens attached. Now, I know turkey vultures freak some people out—omens of death and all that—but I think they are magnificent birds, so big and slow it’s amazing they can get airborne. Yet they soar the skies with eyes so acute they can spot a bloodied varmint from a mile up. No, they won’t win any beauty contests, but they perform a valuable service, cleaning up road-kill—like the unfortunate squirrel in our front yard. Sure enough, a gaggle of vultures showed up in no time all.

Here’s a fun fact: turkey vultures mate for life and can go for days and weeks or months without food. So while one dominant male aggressively tore into the fresh squirrel meat, an elder matron kept watch for circling red-tail hawks, only having a nibble after the others had flown into the trees, panicked by passing cars. I was simultaneously revolted and fascinated by what I was witnessing through the viewfinder, which blacked out momentarily as the shutter clicked open and closed. Minutes passed and I couldn’t help but get some pretty gruesome shots. Still, I kept shooting.

Later this afternoon, I opened the files on my computer and my jaw dropped—and my stomach turned. What I had barely been able to see while peering through the dim viewfinder glowed large and vivid on the screen, realer than real. I edited some of the simple “portraits,” like the serenely matriarchal lookout and some of the others (mostly sans carrion) and uploaded them to Flickr.

There was one photograph that still haunts me: the buzzard has dragged the squirrel out into the street and I captured the moment where he lets the poor creature drop from his beak. In that split second, the dessicated squirrel, warm, wet guts protruding from his mouth, appears to stand one last time on his hind legs as the vulture looks down, mocking him with a gleefully open mouth. I call it “The Dance of Life and Death.”

But I prefer to keep this image to myself.
Posted by Rodger Coleman at 8:41 PM 2 comments: