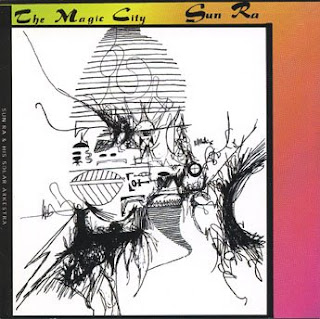 Sun Ra often claimed he was not from this planet but from Saturn, sent to Earth on a mission to help save humanity from itself. But in 1914, Herman “Sonny” Poole Blount was born in Birmingham, Alabama. Nicknamed “The Magic City” for its booming economic growth at the turn of the century, Birmingham was, of course, also the scene of harsh racial injustices which eventually erupted into violence and protest during the civil rights movement. Sonny left Birmingham for Chicago in 1946, legally changed his name to Sun Ra, and never looked back. Yet Sun Ra retained some affection for his hometown, composing such homages as “Magic City Blues,” “The Place of Five Points,” and “West End Side of Magic City” and regularly performed “Stars Fell on Alabama” and “Alabama” in concert. Sonny admitted to MTV’s Michael Shore that “The Magic City” was indeed about Birmingham and listening to it, one can sense Ra’s conflicted ambivalence towards his subject. At almost thirty minutes, it is Ra’s magnum opus and, while comparable in scope and ambition to Ornette Coleman’s Free Jazz (Atlantic) (1960) and John Coltrane’s Ascension (Impulse!) (1965), “The Magic City” sounds nothing like either of them. Disavowing the churning rhythms and fire-breathing onslaughts typical of “The New Thing,” “The Magic City” maintains a chamber-music-like intimacy and reserve with horn duos and trios forming and dissolving around Boykins’s arco bass, Ra’s fleet piano work and the reedy whine of the Selmer Clavioline. Only near the end does the full ensemble briefly engage in some full-throated, high-energy group improvisation. Szwed astutely points out that “Sun Ra’s Music often attempts to completely integrate the soloists with the ensemble to make a single statement” (p. 214) and “The Magic City” is a perfect example of this attempt. Gilmore stated that the piece was never performed in concert because it was “unreproduceable, a tapestry of sound” (Id.).

Ra had been working with the material that would become “The Shadow World” at least as far back as “The Outer Heavens” (on Art Forms of Dimensions Tomorrow) and it appears in rough form on Sun Ra Featuring Pharoah Sanders and Black Harold (there titled, “The World Shadow”). Here, the fiendishly difficult composition gets its first complete performance. A complex unison melody for saxophones is set off against a 7/4 rhythm and Ra’s contrary, angular piano. After a brief series of solos, saxophones return with the melody while trumpet states the counter-melody originally intimated by the piano. Szwed writes: “Sun Ra took considerable pleasure from the agitated difficulty of the piece, and noted that once during a rehearsal for a French TV show the producer was so disturbed by it that he threatened to cancel the show if they insisted on playing it” (p. 215). “The Shadow World” would become a fixture of the Arkestra’s live sets going forward, often performed at impossibly fast tempos.

“Abstract Eye” and “Abstract I” appear to be different takes of the same piece and, according to the discography, there is a twelve-inch test-pressing from Variety Recording Services in existence where the pieces are entitled, “Abstract Experiment Take 1” and “Abstract Experiment Take 2” (Campbell, 2nd ed, p. 119). This reinforces my suspicion that these tracks might be rehearsals for what would become “Heliocentric” and “Outer Nothingness” on Heliocentric Worlds Vol.1. They share the same, bottom-heavy instrumentation of bass, bass marimba, tympani, and braying trombones with piccolo and trumpet providing extreme high-register contrast. The feeling here is a little more extroverted with the saxophones taking a more prominent role in the proceedings, but they are notably similar in structure with flittering solo statements set against rumbling bass marimba, pounding tympani, and singing arco bass. Very interesting.

Another track from these sessions entitled, “Other Worlds,” is available on the 1989 Blast First compilation, Out There a Minute.

Posted by Rodger Coleman at 4:54 PM

The two "Abstract" pieces on the CD are definitely conceptually related to "Heliocentric." They both share the opaque, mysteriously dark quality of "Heliocentric" and "Outer nothingness." What really intrigues me about them is their relationship to each other. They are really hard pieces to write about, or even think about, because they're so abstract, and yet it's really fun to listen to them. There's a flute motif that seemingly appears in both versions. How much of a blueprint did Ra give the musicians before they started? And how could they tell when it was over? One piece is over a minute longer than the other, but both go through the same distinct passages--they just walk a little faster through one?