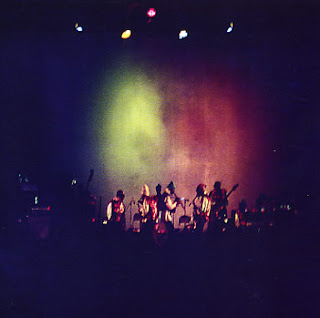 The Arkestra’s transformation from obscure, local oddballs into the restlessly world-touring juggernaut it eventually became was a long time coming. From the mid-fifties until 1961, Sun Ra was known (if at all) only in around Chicago and a doomed excursion to Montreal left the Arkestra stranded in New York City, impoverished and almost virtually unknown. Yet Sonny persevered with the small group of musicians that remained, rehearsing, recording, and picking up gigs here and there around the city, barely eking out a precarious existence. It really wasn’t until ESP-Disk’ released Heliocentric Worlds Vol.1 in 1965 that Ra’s reputation slowly began to spread beyond the confines of New York (and Chicago) and allowed for larger ensembles and the growth of his homegrown Saturn record label, which would proceed to document a lot of previously unheard music. Heliocentric Worlds Vol.2 appeared in 1966, followed by a brief tour of New York State colleges (which yielded Nothing Is, released in 1969). Significantly, the Arkestra began a long-term Monday night residency at Slug’s Saloon in 1966 and the regular paying work attracted fresh young musicians to Sun Ra’s interplanetary big-band concept. With an enlarged band of more or less dedicated musicians with which to work, Ra began to develop his unique stage show, which he dubbed, “The Cosmo Drama” or “Myth-Ritual.”

Ra believed music could change the people of Earth and that myth was “something greater than truth” (quoted in Szwed, p.256). The truth is something too horrible to contemplate; but through myths about the future told with music, Ra hoped to demonstrate that the impossible could become possible. Szwed sums up Ra’s musico-philosophy thusly: “The future that people talk about is no good; we need to do the impossible, for everything possible has been tried and failed. Truth (the possible) equals death; myth (the impossible) equals immortality…Music could be used to coordinate minds. It could touch the unknown part of the person, awaken the part of them that we’re not able to talk to, the spirit” (Id.) The Cosmo Drama would often begin with the “thunder drum” alone with the staggered entry of the ensemble, dancing and banging on percussion instruments, leading into a group improvisation before Ra himself would make his dramatic appearance. Various original compositions, conducted improvisations, big-band rave-ups, solos and duos, space chants and oracular proclamations would proceed across sometimes vast expanses of time, ending with an extended, dancing exit, everyone joyfully singing “We Travel the Spaceways.” While the overall structure of the Cosmo Drama would remain relatively fixed, the sequence of events was finely tailored to the venue and audience vibe: according to Danny Thompson, the Arkestra had “as many as fifteen different arrangements of the same piece – such as “El is the Sound of Joy” – and any one might be used. It was adjusted to the time, the city, to what people need to hear” (quoted in Szwed, p.259). The astounding, wide-ranging music, the musician’s outrageous theatricality and fanciful costumes, combined with colorful stage lights, films, and slideshows could make for an over-stimulated, multisensory “happening” that suited the times.

By 1968, the United States found itself suffering from violent convulsions as the civil rights and anti-war movements gathered momentum and self-styled intellectuals, college students, Black Nationalists, hippies, and Yippies alike were all drawn to Ra’s spaced-out mysticism, the Arkestra’s high-spirited musicianship, and the accompanying quasi-psychedelic spectacle, although the mainstream “jazz” community remained mystified and dismissive. Sun Ra made his Carnegie Hall debut in April and The New Yorker dismissed it out of hand: “It wasn’t a good movie, and it wasn’t a good concert, and it wasn’t good Dadism. It wasn’t even adept put-on” (quoted in Szwed, p.254). Despite such withering condescension, Sonny was finding his audience. In June, the activist/agitator John Sinclair brought the Arkestra to Detroit to open for the radical, proto-punk rock band, MC5, at Wayne State University. The MC5 so revered Sun Ra, they co-credited “Starship” with him on their debut album, Kick Out the Jams (Elektra). In August, the Arkestra was invited to Washington, D.C. to perform in the atrium of the Corcoran Gallery where The Washington Post ambivalently described Sun Ra as “a kind of black John Cage” but not "pitiful and dull" (quoted in Szwed, p.255).

Singer/dancer June Tyson had joined the Arkestra by the fall of 1968 and in December, the Arkestra made its first trip to California, playing concerts at the College of Marin, San Jose State College, the Oakland Auditorium Theatre, and the San Francisco Art Institute. They made a second, more successful, journey to west coast in April, 1969 where they appeared at the University of Santa Clara, two nights at Dorsey High School in Los Angeles, U.C. Davis, and the suspiciously named Maryjane Coffeehouse in Sacramento. However, on their way back east the Arkestra’s van overturned on Route 80 between Fernely and Lovelock, Nevada. Thankfully no one was injured, but most of the fragile Strange Strings instruments were completely destroyed. Sinclair again hosted the Arkestra for the Detroit Rock and Roll Revival at the Michigan State Fairgrounds in May, where they shared a bill with MC-5, The Stooges, Ted Nugent, The Amboy Dukes, and Chuck Berry.

In a measure of the Arkestra’s new-found prestige, they were invited to appear before four thousand people at the famed Newport Jazz Festival on July 3, 1969. However, the Arkestra’s interplanetary extravaganza must have seemed comically out of place amidst the staid conventionality of Phil Woods and Kenny Burrell, with whom they shared the bill. It also didn’t help that it rained all day at the outdoor festival and the audience’s reaction to Ra’s performance was lukewarm at best. However, a thirty-six minute audience tape survives and shows the Arkestra in full flight, making no concessions whatsoever to the elitist, patrician atmosphere. To be sure, the sound quality is pretty dreadful, but an approximation of the music can be discerned amidst the murk.

The tape opens in the middle of one of those roiling dark funk jams with piercing shards of dissonant organ and braying horns. Suddenly, the ensemble plays a sweet-sounding sectional right out of the nineteen-forties — until the ending fermatas swell into universe-shattering space chords. This is a very interesting composition (whose title is presently unknown); perhaps it is a precursor to the famous “Discipline” series of compositions Ra would begin in the nineteen-seventies (see Campbell & Trent, p.151). Ra then wrestles the band into a blistering rendition of the fiendishly complicated “Shadow World” which quickly segues into a gospelish space chant, “Prepare for the Journey to Other Worlds,” which quotes liberally from “Swing Low, Sweet Chariot.” A crazed keyboard intro summons up a quick rendition of “Velvet,” with Ra’s distorted organ sound adding a grating, industrial texture to this otherwise swinging, big-band number, which elicits some rather tepid applause at the end. June Tyson then sings “Outer Space (Is a Pleasant Place)” in a pure, soulful tone over a skittering, atonal accompaniment. Soon, however, the instruments take over with some raging sonic chaos which gives way to a mad-scientist organ solo. Ra then introduces the loping groove of “Exotic Forest,” a vehicle for Marshall Allen’s intensely scurrying oboe and Ra’s apocalyptic organ. A quick blast through the fanfare and percussion fest of “Watusi” leads to the cartoony group sing-along, “Enlightenment” and the Tyson-led space chant, “Somebody Else’s Idea,” which cuts off after a minute and forty-eight seconds. This tape is a fascinating glimpse of one of the Arkestra’s first high-profile gigs, but the atrocious sound quality will repel everyone but the most committed fan.

Besides their continued intermittent residency at Slug’s, a few gigs at the Red Garter, and their infamous Carnegie Hall debut, the Arkestra played some of the more luxurious New York venues in 1968 and 1969, including a month-long run at the Garrick Theatre, a stint at the Squat Theater, and even a performance at the Brooklyn Academy of Music’s Opera House. No matter what the establishment critics and jazz traditionalists thought about Sun Ra, it was becoming apparent that he knew how to put on a show and could draw a paying audience. The Arkestra would be on the road constantly from this time forward and would make their first trip to Europe in 1970, beginning an era of non-stop traveling of the world, bringing the Cosmo Drama and Myth Rituals to the people of the Earth. After a period of scant documentation, the discography begins to overflow with live albums, radio broadcasts, and, yes, audience recordings. Sorting out the seventies is the task ahead here on Sun Ra Sunday.
Posted by Rodger Coleman at 5:29 PM