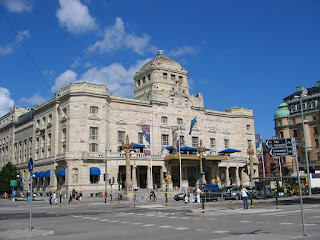 In the fall of 1971, the Arkestra embarked on their second European tour, this time enlarged to twenty-two musicians, two singers, six dancers along with Sun Ra himself. Once again, the itinerary was haphazardly arranged, with gigs spread far and wide and lack of money would cause many of the newcomers to abandon the tour along the way (see Szwed pp.286-287). Curiously, while Ronnie Boykins had returned to the fold and is clearly present on the rehearsal tape recorded just days before their departure, he did not make the trip to Europe. In fact, there was no bass player at all on this tour, except when Pat Patrick would put down his baritone sax and pick up the Fender electric bass on a few tunes. Nevertheless, when a gargantuan Arkestra took the stage on October 12 at Sweden’s prestigious Royal Dramatic Theatre (a/k/a Dramaten) in Stockholm, they were clearly energized and inspired by the lavish surroundings. In another measure of how well Sun Ra was treated in Europe, the state-run radio station broadcast sixty minutes of the performance, a copy of which circulates amongst collectors. Thank you, Sweden! The stereo FM reception is a little hissy and there are occasional wow-and-flutter problems but overall, it is very nice recording for the period and truly an excellent performance.

There is, however, considerable confusion about some of the titles found on this tape. Campbell & Trent list the first track as “Discipline 2” (p.174) but I don’t think that is correct. If so, it is a radical rearrangement of the “official” version which was recorded just weeks later and released on Nidhamu (Saturn LP) (now, confusingly, found on Art Yard’s Horizon CD). After careful listening, I am unconvinced. Sam Byrd (who is really is much more of a Sun Ra expert than I am) suggests they are playing an early version of “Sometimes the Universe Speaks,” a composition which was recorded in 1977 and released on The Soul Vibrations of Man (Saturn LP). I think Sam might be correct, although, again, the arrangement is very different, making direct comparisons difficult. The long-breathed melody for two flutes certainly shares a similar contour, but here they are accompanied by saxophone and trumpet harmonizations and there is a swinging fanfare section midway through that I do not hear on the LP version. In any event, it is a lovely composition that gives way to a very pretty duet with Ra on synthesizers and William Morrow on vibraphone before the coda. Afterwards, Sonny launches into a prototypical “mad-scientist”-style organ solo with the Arkestra contributing some free-jazz skronk here and there.

A dramatically dissonant organ chord signals another mysterious piece which Campbell & Trent identify only as some unknown number in the “Discipline” series. The label on my (weirdly indexed) CDR says “Discipline 5” but, after comparing it to the “official” version recorded in December 1971 (released on the Freedom/DA Music CD, Calling Planet Earth), I don’t think that is correct either. Whatever its title, this composition is conceptually similar to others in the “Discipline” series with its through-composed horn-lines and sweet and sour harmonies, fading out to Ra’s spacey, vibrating organ clusters. Whatever the actual titles, this thirteen-minute sequence conclusively demonstrates Sun Ra’s prolific genius as a jazz composer.

Pat Patrick takes up the electric bass for joyful romp through “Enlightenment” wherein the rest of the Arkestra sings along with June Tyson, except for Marshall Allen’s lone flute obbligato. The ragged choir moves seamlessly into “It’s After the End of the World” before all hell breaks loose with wild free-group-improv, finally yielding to Eloe Omoe’s reedy bass clarinet and a typically fire-breathing solo from John Gilmore on tenor sax. The intensity level becomes almost unbearable as the Arkestra prods Gilmore to ever greater heights of outrageous invention until Ra cuts things off with quivering organ chords to introduce “Discipline 8.” Another moody piece for intricately hocketed horn lines, this particular number eventually settles on a brooding, three-note riff, harmonized in modal parallels which repeat endlessly, undergoing subtle permutations of tone and timbre through shifting instrumentation. Meanwhile, the soloists, led by Gilmore’s tempestuous tenor, take things totally out over the heaving, trance-inducing riff. Art Jenkins even contributes an evocative “space voice” solo accompanied by Marshall Allen’s flutter-tongued flute, followed by a brilliantly flashy trumpet solo by Kwame Hadi and distantly clanging marimba.

Suddenly, Ra plays a brightly swinging chord change, William Morrow plays a bebop-ish melodic figure on vibes and, while Campbell & Trent list the ensuing composition as “The Rainmaker,” I think Sam Byrd is again correct in identifying this fleeting piece as “Sketch,” which only otherwise appeared on 1964’s Other Planes of There (Saturn/Evidence CD). (Good ears, Sam!) While the organ and vibes only hint at the composition, the horns enter with a surprisingly adept run through the entire head before the dissolving back into the three-note riff and a reprise of “Discipline 8.” Fascinating! The tape closes with a long, rip-roaring rendition of “Rocket Number 9,” over twelve minutes of ecstatic antiphonal vocals and wigged-out saxophone solos. “Zoom! Zoom! Zoom! Up in the Air!” Just as Ra cues a throbbing, screechy space chord, the radio announcer interrupts to conclude the broadcast. Argh!

Despite some minor technical problems, this is an exquisite artifact and well worth seeking out. If the original master reels still exist, it would make for a wonderful CD which I would certainly buy in a heartbeat. And perhaps more of this concert was recorded than was broadcast…? One can dream…
Posted by Rodger Coleman at 5:35 PM

great review - and thanks for including the venue picture. it adds a sense of place for this time.