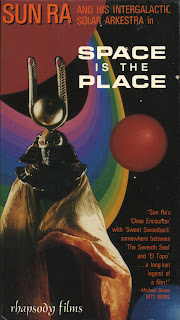 Soon after their return to California, Sun Ra was approached by film producer Jim Newman about a possible thirty-minute documentary about the Arkestra to be aired on PBS. While that idea never panned out, with the help of director John Coney, a different kind of film was envisioned: Space Is the Place, “part documentary, part science fiction, part blaxploitation, part revisionist biblical epic” (Szwed p. 330).

The final version of the film is easy enough to summarize (if not so easy to understand): having been traveling in space for some years in a rocket ship propelled by music as fuel, Sun Ra locates a planet which he deems suitable for the resuscitation of the black race. He returns to earth and lands in Oakland, circa. 1972 (where in real life the Arkestra was staying and where the Black Panthers were under stack by the police and the FBI). Throughout the film Ra battles with the Overseer, a supernatural pimp who profits from the degradation of black people. Sun Ra offers those who would follow him into space an “alter-destiny,” but the Overseer, the FBI, and NASA ultimately force him to return to space prematurely (Id. pp.330-331).

Sun Ra was actively engaged in the film-making process -- to the point of editing out several scenes, including two “sexual situations,” a scene where a junkie responds to Ra’s music by quitting drugs and getting on the spaceship, and one in which Sun Ra saves some white people (!) (Id. p.332). In the end, the movie was cut from ninety minutes to just over an hour and while it’s fun to watch, it’s really not a very good film (we fell asleep watching it last night). My favorite scene is the flashback to 1943 and it is apparently based upon a real event back when Sonny was playing piano in a strip joint during his early days in Chicago: after being threatened by the Overseer, Ra plays an increasingly cacophonous piano solo which literally blows everyone out of the bar in a cloud of smoke and atonal fury. Hilarious!

The film finally opened in 1974 and enjoyed a few screenings in San Francisco and New York, but soon sank without a trace. Over the years, the Arkestra would sometimes project pieces of the movie during concerts and it eventually earned some status as a “cult classic.” But Sonny had high hopes for the movie and was bitterly disappointed in its failure. He later (rather implausibly) claimed that some of his ideas were stolen from him in Star Wars and Close Encounters of the Third Kind (Id. p.333). Rhapsody Films issued it on VHS cassette in 1993 and Plexifilm released an expanded version on DVD in 2003 -- both of which are now long out of print. Here are a couple of clips to give you an idea of what it’s like:


The Arkestra also entered a real recording studio for the first time since leaving New York to record the soundtrack to the film, which was released by Evidence in 1993. We’ll have a listen to that next week.
Posted by Rodger Coleman at 5:29 PM

Sadly, I never picked up the DVD of this when it was available, and it now commands absurd collector's prices. So I'm not exactly sure if the deleted scenes were restored. Anyone know?

Yes, I'm pretty sure the deleted scenes are restored, although maybe not every scene you mention--I haven't watched this in a while. Definitely the scene with the Overseer and two naked girls in the hospital has been restored (to the overall detriment of the film).

To me the absolute best part of the film (because of the music) is the scene when Ra rides through the streets of Oakland in the white convertible with the Overseer. Check the music playing during that scene--this is great stuff, and it didn't appear on the soundtrack CD. The only other version of this I know of is from one of the 1972 Slug's shows.