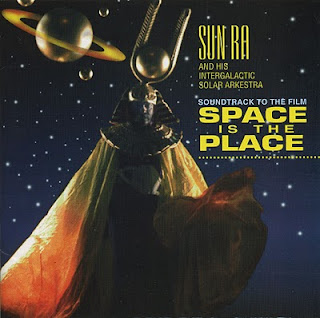 Sun Ra & His Intergalactic Solar Arkestra:
Soundtrack to the Film Space is the Place (Evidence CD)

In early 1972, the Arkestra entered a real recording studio for the first time since their relocation to California in order to record the soundtrack and to be filmed for inclusion in the movie, Space Is the Place. The name of the studio is unknown and, in any case, it is long gone by now; but according to producer Jim Newman, it was “on Connecticut Avenue at the foot of Potero Hill in San Francisco” and the crew was borrowed from the legendary Different Fur Trading Company (Campbell & Trent, p.185). While an accompanying album to be released on Blue Thumb is alluded to in the movie, most of the music recorded at these sessions was finally issued for the first time by Evidence in 1993. The material was heavily edited for the film and mostly drawn from the working repertoire of the period, including such live stalwarts as “Watusa,” “Satellites Are Spinning,” “Outer Spaceways Incorporated,” “We Travel the Spaceways,” “Love in Outer Space,” and, of course, “Space Is the Place.” While the performances are rather abbreviated on the CD, the sound quality is excellent and, despite the fact that John Gilmore is heard primarily on drums rather than saxophone, there are several interesting bits of music which make this well worth hearing.

For example: “Under Different Stars” is an intense conducted improvisation featuring trumpeters Kwame Hadi and Wayne Harris bathed in thick reverb while Sonny makes burbling noises on electronic keyboards. And while “Discipline 33” is mis-titled according to Ben Opie (Id.), it is definitely from the Discipline series of compositions with its intricately interweaving horn riffs and Hadi again turns in a tasteful solo; sadly, it fades out too soon never to be played again. “The Overseer” is another free-jazz freakout, tautly reined in by Ra’s orchestral organ sprays while “Mysterious Crystal” evokes the futuristic exotica of Strange Strings, featuring a typically brilliant oboe solo by Marshall Allen. Finally, Sun Ra takes a thoughtful MiniMoog solo on “Cosmic Forces” and launches into some portentous declamations on “I Am the Alter-Destiny” and “I Am the Brother of the Wind,” the latter allowing Eloe Omoe to shine on raspy bass clarinet while the ensemble rages in the background.

According to Campbell & Trent, edited versions of “We’re Living in the Space Age” and the “Unknown Factor” were used in the film but not included on the Evidence CD (Id). Furthermore, the wonderfully atonal piano solo from the hilarious strip club scene is also absent. It seems likely all this music was recorded at a later date as work continued on the film well into 1974, but these have not turned up to date. Additionally, the 2001 ESP Radio Tribute broadcast included extended versions of “Outer Spaceways Incorporated” and “We’ll Wait for You,” which segues into “Strange Worlds” and ends with another spaced-out synthesizer solo. Unfortunately, these tracks are in mono and suffer from slightly degraded sound quality. Even so, completists will want to search them out.

Space Is the Place may have been something of a cinematic failure, but the soundtrack CD is enormously satisfying and makes for an excellent overview of the Arkestra’s music during this period. For casual and fanatical Sun Ra fans alike, it is absolutely essential.
Posted by Rodger Coleman at 5:34 PM

Great blog you have here, if you’re interested here is the link to my blog of poetry.

Hoping you have a wonderful week,
Grant-Grey

Re: the Discipline piece, incorrectly titled "Discipline 33" (the actual D.33 appears on the Blue Thumb LP): this is a great piece, for me the highlight of this album. Hadi's trumpet solo is transcendent, a perfect distillation of his style. And the baritone sax riffs are just so cool! The only other appearance of this tune, I think, is on the 1972-08-19 Slug's show, with vocals added on top ("At first there was nothing...").